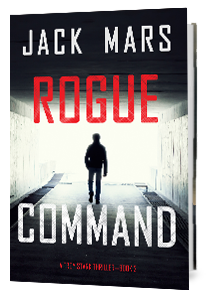 “Thriller writing at its best. Thriller enthusiasts who relish the precise execution of an international thriller, but who seek the psychological depth and believability of a protagonist who simultaneously fields professional and personal life challenges, will find this a gripping story that’s hard to put down.”
–Midwest Book Review, Diane Donovan (regarding Any Means Necessary)

“One of the best thrillers I have read this year. The plot is intelligent and will keep you hooked from the beginning. The author did a superb job creating a set of characters who are fully developed and very much enjoyable. I can hardly wait for the sequel.”
–Books and Movie Reviews, Roberto Mattos (re Any Means Necessary)

From #1 bestselling and USA Today bestselling author Jack Mars, author of the critically-acclaimed Luke Stone and Agent Zero series (with over 5,000 five-star reviews), comes an explosive new, action-packed thriller series that takes readers on a wild-ride across Europe, America, and the world.

Although elite Navy Seal Troy Stark was forced into retirement for his dubious respect for authority, his work in stopping a major terrorist threat to New York did not go unnoticed. Now part of a new, secret international organization, Troy must hunt down all threats to the U.S. and pre-empt them overseas—bending the rules if he has to.

In ROGUE COMMAND, a group of European terrorists have a new, unexpected target, with nuclear-level consequences. With the clock ticking for Troy to stop them before they set off a global war, Troy, partnered with an Interpol agent whom he grudgingly respects, is up against the enemy of his life.

But there is only one problem: no one knows exactly what the target is.

And as Troy’s investigative work leads to a discovery, he realizes it may not be the target—or the enemy—they all think it is. Just how deep do these terrorists’ connections run?

An unputdownable action thriller with heart-pounding suspense and unforeseen twists, ROGUE COMMAND is the debut novel in an exhilarating new series by a #1 bestselling author that will have you fall in love with a brand new action hero—and turn pages late into the night.